Narrative of a Room. 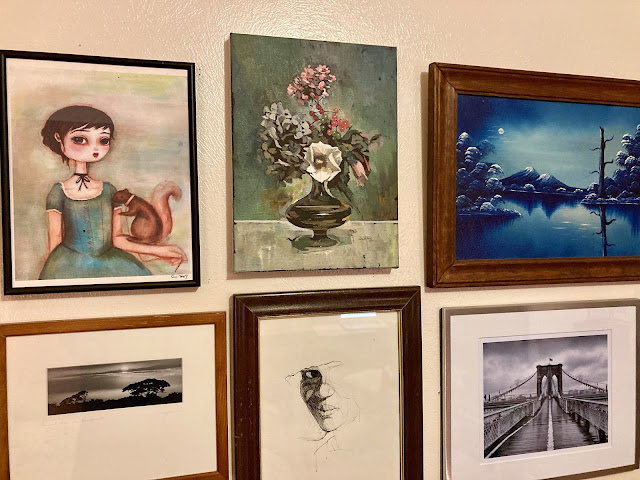 I'm in our downstairs guest bedroom, my mom's room, Amma's room—though she lives 2,000 miles away and visits only a few weeks per year. Her most recent visit, however, was expansive because of the pandemic. She was here for the entire month of October, so the bedroom is even more imprinted with her than usual.

And when I use the downstairs bathroom shower and her products that she left behind, the entire downstairs smells of her in a truly nostalgic and visceral way. I'll travel upstairs and the girls will freeze whatever they are doing and say, in unison, YOU SMELL LIKE AMMA.

Then, one of them and then the other, and then all of us will say, I miss Amma.

So here I am, in Amma's room, perched in the camel-colored Ikea chair with a removable cover for when our dog pees on it. I have a weighted Frozen 2 blanket on my lap to keep me from drifting too far off. (Elsa gazes up at me, like, what’s next, woman?) I also have the pillow with all the black birds on black branches on my lap as sort of a squishy desk to hold my computer. 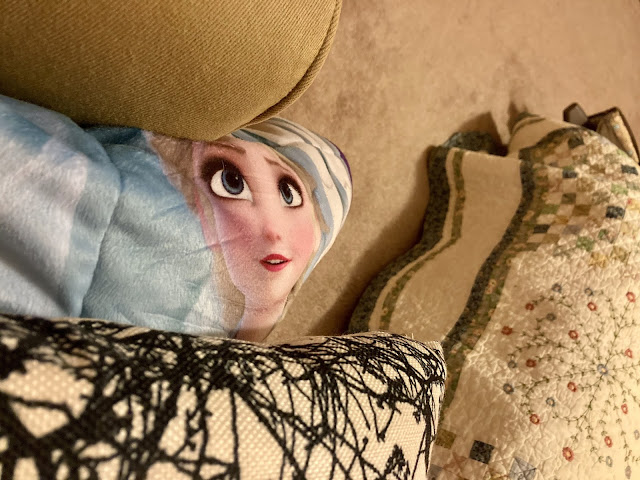 My green tea is already cold, simply from the journey down the stairs. It's almost immediate.

Like words. The moment I write something down, it seems to change instantly. Like writing in sand or papers beneath a ceiling fan. It’s all moving and moving even as I sit here, still.

Amma’s room has had many incarnations since we moved here 13 years ago. I am thinking about how a space, a habitat, can evolve like a living thing to keep up with the living creatures that live there.

Think of the homes/habitats where the space has not grown with the people. Homes with visible kid-toys, even though the kids are now teens, or rooms where the contents have clearly not been updated in decades, though the inhabitant has surely aged over the years. It’s like a lyrical version of Feng Shui.

Sometimes we grow into our spaces and sometimes we grow out of them. COVID has offered the opportunity to take a much more nuanced look at these spaces that we can become complacent to when life is pulled thin.

This room ultimately began as a guest room. That is how Jesse and I saw it when we strolled through these empty rooms over thirteen years ago. He and I painted an accent wall a deep shade of rust. It was one of our first acts of ownership and it was a thrill.

It then became a massage room when I was a fledgling massage therapist, but the lack of windows gave it a not-so-good cave-like feeling, so it moved back to a guest room. A perfect sleeping room. (Though I sure as hell hope there is never a real need for a window in here.)

I’ve had a writing desk in and out of here over the years. Again, the lack of windows can feel a bit stifling, and yet with two kids and very little in the way of space-to-myself, it can also feel like a spacious vault, but without a door that locks. (Still, every so often, HEY MOM, thump-thump-thump comes down the stairs and hallway and through the door.)

We referred to Amma’s room as the "market" during early COVID times when we bought 3x as much of everything. Are we out of cheddar bunnies? Check the market. The wall was lined up with non-perishables, boxes from small to big and big to small, a basket for the floppy, bagged goods. We organized it again and again, like a play grocery store. Then we started noticing things disappearing from the shelves and making their way to strange and random places. But since there was no inventory process, I didn't notice when things went missing. I recently found two boxes of Annie’s Mac and Cheese wrapped in a brown bag with painters tape shoved behind the reading chair in Ruth’s bedroom. A box of couscous wound up way behind her pajamas in a drawer.

Food continues to pop up here and there like a squirrel's nuts that were buried from the previous season.

Amma’s room is the room I come to when I am ill. A retreat from the rest of the house, in spite of the fact that it sounds like a bowling alley upstairs with two kids, a dog, a cat and a husband—all walking with a relatively gentle gait. I have clocked in dozens of sick days in this bed over the years, listening to podcasts or books-on-tape with eyes closed, trying to passively absorb some sort of nourishment into my cells and pores until my body renders itself ready to delve back into the active.

Amma’s room is the room next to Ruth's room, downstairs, across the hall. The way our house is laid out, there are two bedrooms upstairs and two downstairs. (Though, as I said, one of those has no windows.) When we bought the house, we never thought to envision how the space would play out once we had kids.

Around the time Ruth turned four, earlier this year, our sleep had all but deteriorated. She'd call up every night around 4am and we'd stumble down the stairs and lie down next to her on the floor and half-sleep. We’d wake in a stupor and with aching muscles. It was an unsustainable situation.

So we began to switch-off sleeping in Amma’s bedroom. Ruth would fall asleep in her bed then come to that Amma’s bed during the night. We were all sleeping better—thank God— but Jesse and I missed being in the same bed.

How fascinating that suddenly, this room that could go days without even being entered took on the lived-in touch of bedtime paraphernalia and evening accoutrements.

My mom's visit for the month of October changed all that. We moved Ruth into our room on an air mattress on the floor and that is where she continues to reside, giving our bedroom an over-crowded dorm-type vibe. It feels crucial to be in bed with Jesse again—having his warm body next to mine as I read the New Yorker on my teeny I-phone screen—and we are, by and large, all sleeping again.

The furniture in Amma's room is currently piece-meal and haphazard, on most accounts. The bed is intentional, however, along with the matching bedside table—two pieces of royalty in a commoner’s land. They were transported directly from Jesse's bachelor pad as a happy little set, and they continue to reside as such.

The other intentional piece of furniture is my new blue desk—a gift from Jesse for my 43rd birthday last June.

Up until then, I'd been a creative vagrant. I had a desk in the past—one I found on the side of the road and shoved into the back seat of my old Saturn. It served its purpose for a decade but needed to be donated a few years ago once the large pieces of kid furniture seemed to be taking over.

Thomas Moore writes that it’s essential to create a physical place where you can go when you need to nurture your soul, the center of your spiritual life. I did that. And it’s blue, and peppered with tchotchkes and bits that continue to provide genuine pleasure: an embroidered Frida Kahlo doll my dear uncle bought for Ruth but I intercepted because Ruth still draws on dolls with crayons. My owl collection like a beautiful and varied adopted family. A tiny typewriter, a stack of colorful field notebooks. Tiny red leather sandals from when I was a babe, too young even to walk. A creeping vine-clipping in a milk glass with visible roots. A clock that appears to have been plucked from the Victorian Era from Jesse’s grandmother, who died last year. Things with meaning. 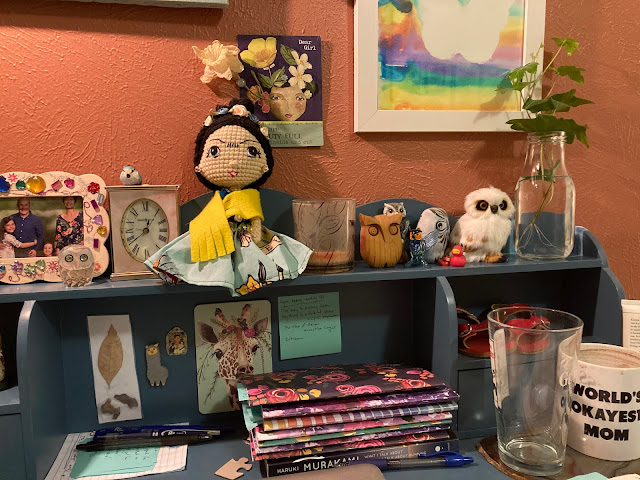 There is also a folding table next to my desk that came from my Grandpa Jack's RV—which sits in our driveway. It slides into a carrying case with two folding chairs, blue and white striped like an awning. I can imagine my grandpa and grandma on a road trip (they drove that thing from Ohio to Alaska once!) in those two folding chairs with the tray between them, holding Grandma's room-temp water and Grandpa's ice cold Diet Coke. (Did he ever miss his beer after he quit drinking? Or the harder stuff?)

Currently, the tray holds a stack of my notebooks, a folder, a started-book on foster care—to lighten the load for the Blue Desk.

The theme of familial representation continues as a wall of photos to-the-side-and-behind the desk— ancestors from both sides encased and displayed in a hodgepodge of mismatched thrift store frames.

My mom, Amma, as a baby in a series of three images that never cease to slay me in their purity and before-everything-ness. (Fun fact: That photo has traveled with me to every place I've ever lived as an adult.) And there's a photo of my dad, Papa, a few years ago but unchanged, at his happiest, on his 70th birthday, with his grandkids piled on him like puppies.

The photos of the young ones are outdated almost the very moment they are hung. 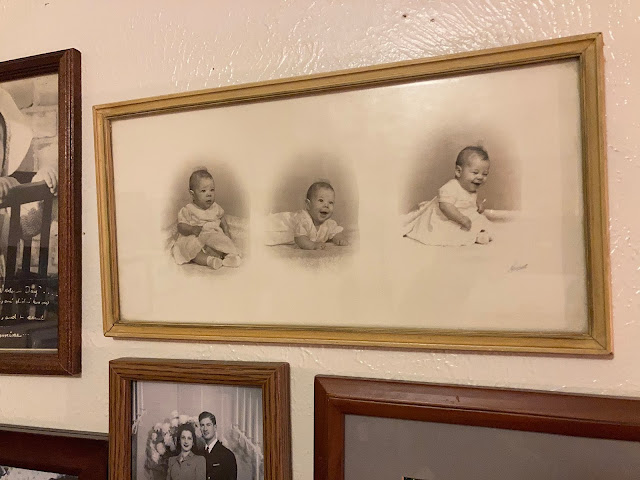 This is the room where I do my ZOOM calls.

There is a gallery-type wall behind me, framed art I've collected over the years. And I’ve made a study of looking at that wall backwards, on the screen. I'm currently in a writing class and I wonder if my classmates notice the framed sketch of Nina Simone done by an old artist friend. Or the entirely blue painted landscape I got from an estate sale when I moved into my first apartment in Colorado. The still life of flowers in a vase—painted by an enormously talented Aunt—that is so crisp in detail it makes you blink. Or the painting of a dainty girl with a squirrel resting on her arm. (Oh how I love that one.)

I would imagine even the contents of the Louvre would start to feel drab if we were forced to live there and gaze at the same masterpieces day after day.

How many of these photos in this framed gallery still light me up? And, if they don't, is it the thing that has lost its vibrancy, or the depth of my own perceptions? 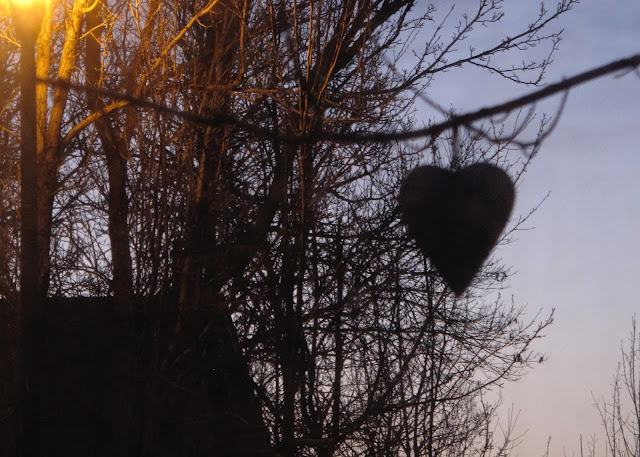 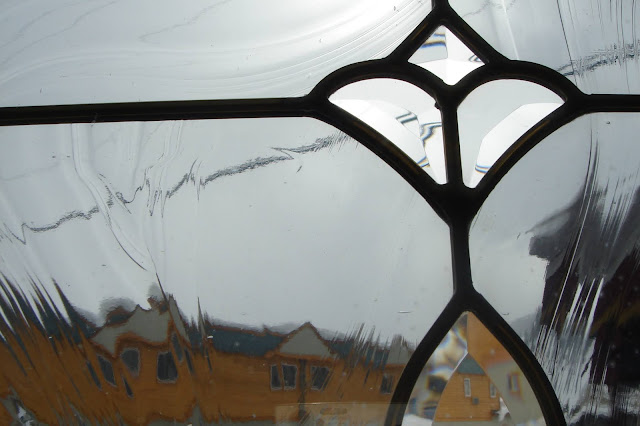